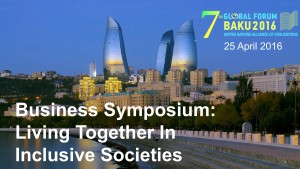 “Business can’t succeed when society fails.” This is the conclusion of a recent high level United Nations business symposium that convened more than 200 business and civil society heads. Leaders of companies ranging from BMW and Airbus to Chinese media and Indian think-tanks convened in the Azerbaijani capital of Baku to discuss the unique power of private-sector business to combat religious intolerance and discrimination.

Nassir Abdulaziz Al-Nasser, head of the UNAOC, emphasized the urgent need for civil society and business to work together. “Private-sector contributions to interfaith understanding and peace can help unravel many political and economic tensions,” he said, emphasizing the urgent need amid growing socioeconomic and political dissonance worldwide.

Brian Grim, President of the Religious Freedom & Business Foundation, led a roundtable on “Private sector contributions to interfaith understanding and peace,” co-chaired by Ms. Sudaba Zeynalova, Chief Adviser to Azerbaijan’s President. Roundtable participants identified five key ways – summarized by the acronym EEEEV – in which businesses can be a powerful support in building interfaith understanding and peace, and thus help unravel many of today’s political and economic tensions. Read more.

Brian Grim spoke on the connection between religious freedom, sustainable development and mercy at this month’s fifth International Leaders Forum at the Vatican. His comments were delivered at the Pontifical University Urbaniana on February 28.

He argued that we will lose the struggle for religious freedom if we focus only on legal and legislative approaches. This is because (a) they do not address the rising tide of social hostilities involving religion, and (b) it misses the greatest argument for religious freedom, i.e., that it depends on mercy and love. 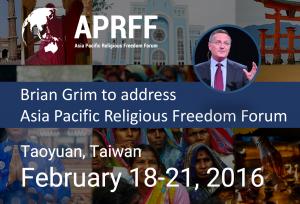 The Declaration for Religious Freedom was personally launched by the President and Vice President of Taiwan’s Legislative Yuan, or Parliament , together with former Taiwan Vice President,  in Taipei, on February 19, 2016.

The CEO of the National Association of Broadcasters, Senator Gordon H. Smith, gave the keynote at the Washington DC Jan. 12th launch of the Religious Freedom & Business Foundation’s Corporate Pledge on Freedom of Religion or Belief (FoRB).

The Religious Freedom & Business Foundation co-hosted this event with the Newseum Institute’s Religious Freedom Center and the Tanenbaum Center for Interreligious Understanding in anticipation of the President’s annual declaration of January 16th as Religious Freedom Day, calling upon Americans to observe this day through appropriate events and activities.

The Corporate Pledge in Support of Freedom of Religion or Belief (FoRB) — which supports religious diversity and freedom in the workplace — sends two clear messages to current and prospective employees: (1) You can work here without changing who you are; and (2) the company respects all employees and will not favor certain employees over others … and that’s good for the business of all.

The FoRB Pledge is one component of a company’s overall strategy to value its employees and increase their loyalty for the benefit of customers and shareholders. The FoRB Pledge is a company’s public commitment to take reasonable steps to ensure that working at the company does not put employees at odds with their deeply held religious convictions. 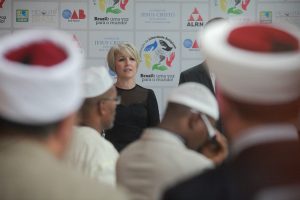 Among the sponsors was Latin America’s oldest mosque, Mesquita Brasil, where the Global Forum was held (see picture gallery below). The forum brought some 700 leaders together for a gala celebration where Muslims, Jews and Christians dined side-by-side to commemorate its status as a leader in religious freedoms. The theme was “Brazil a voice to the world.” The event is the first of a series to bolster the role of business in supporting religious freedom.

Sheikh Abdel Hammed Metwally, religious leader of Mesquita Brasil, highlighted the positive example of interfaith understanding and peace in Brazil. “This will be the first of many meetings”, he said, and “given the importance of the subject we want to share it with more people and show the world how Brazil stands out in leading position, by tolerating and peacefully accommodate the most diverse creeds. “ 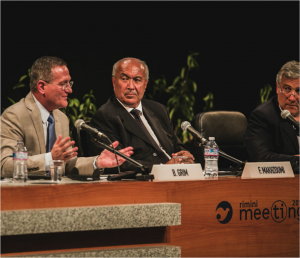 The Rimini Meeting attracts up to 800,000 people from across Italy and the world each summer. The session on economic development as a way to counter violent extremism was held in collaboration with the European Parliament Information Office in Italy and the European Commission Representation in Italy. 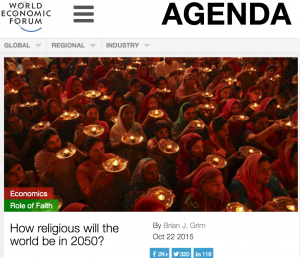 In late October, 2015, in Abu Dhabi, the annual Summit on the Global Agenda – the world’s largest brainstorming event – brought together the thought leaders of the World Economic Forum’s Network of Global Agenda Councils, comprising more than 80 groups of experts from academia, business, civil society, international organizations and government.

Among these councils, members of the Global Agenda Council on the Role of Faith aim to provide thought leadership that furthers within World Economic Forum activities the understanding of faith’s complex influence on global affairs. The council and its members seek to raise awareness of the criticality of “religious literacy” – ensuring leaders from government, business and civil society adequately comprehend religion’s nuances and drivers, as well as its impact on communities, markets and governance. It aims to transform perspectives on faith in government and the private sector, specifically in nations experiencing dramatic change (for example, immigration dynamics, internal conflicts, freedom of beliefs/religion and emerging market challenges).

The council is developing a toolkit to teach religious literacy through awareness, assessment and analysis. The first part of this toolkit highlights the impact faith has on economies, particularly through demographic and market analysis.

As part of this toolkit, Brian Grim presented a new study by the Religious Freedom & Business Foundation, Changing religion, changing economies, to the Global Agenda Council on the Role of Faith at the annual summit in Abu Dhabi. 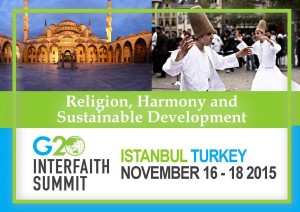 RFBF President Brian Grim spoke at the November 2015 G20 Interfaith Summit in Istanbul, Turkey. He spoke on how religious freedom contributes to sustainable development. He also highlighted the Foundation’s interfaith Empowerment+ social cohesion initiative, which embodies why religious freedom is important: it sets people of faith free to do good.

Grim concluded with new research on how religious freedom is associated with gender empowerment and better lives for women. The research summary – written with Jo Anne Lyon, General Superintendent of the Wesleyan Church worldwide – was just published as part of Grim’s & Dr. Lyon’s work on the World Economic Forum’s global agenda council on the role of faith.

The summit came in the wake of a series of terror attacks by ISIS in Beirut, the Sinai and Paris. Grim’s blog, The Weekly Number, looked at the growing level of religious hostilities that led up to the most recent attack. 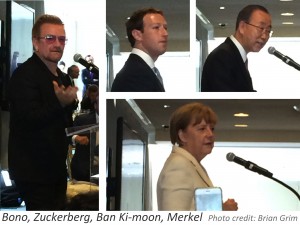 In his opening comments, the Secretary-General specifically called for increased private sector partnerships. For instance, the Religious Freedom & Business Foundation has partnered with the UN Global Compact’s Business for Peace platform to hold the Global Business & Interfaith Peace Awards during the 2016 Rio Olympic and Paralympic games. The Awards will recognize business leaders who are promoting interfaith understanding and peace – foundational elements of inclusive growth.

The forum, part of the UN Global Compact initiative, focused on the role of the private sector in implementing the Sustainable Development Goals, which were adopted on Friday and include a 15-year global plan of action to end poverty, reduce inequalities and protect the environment.