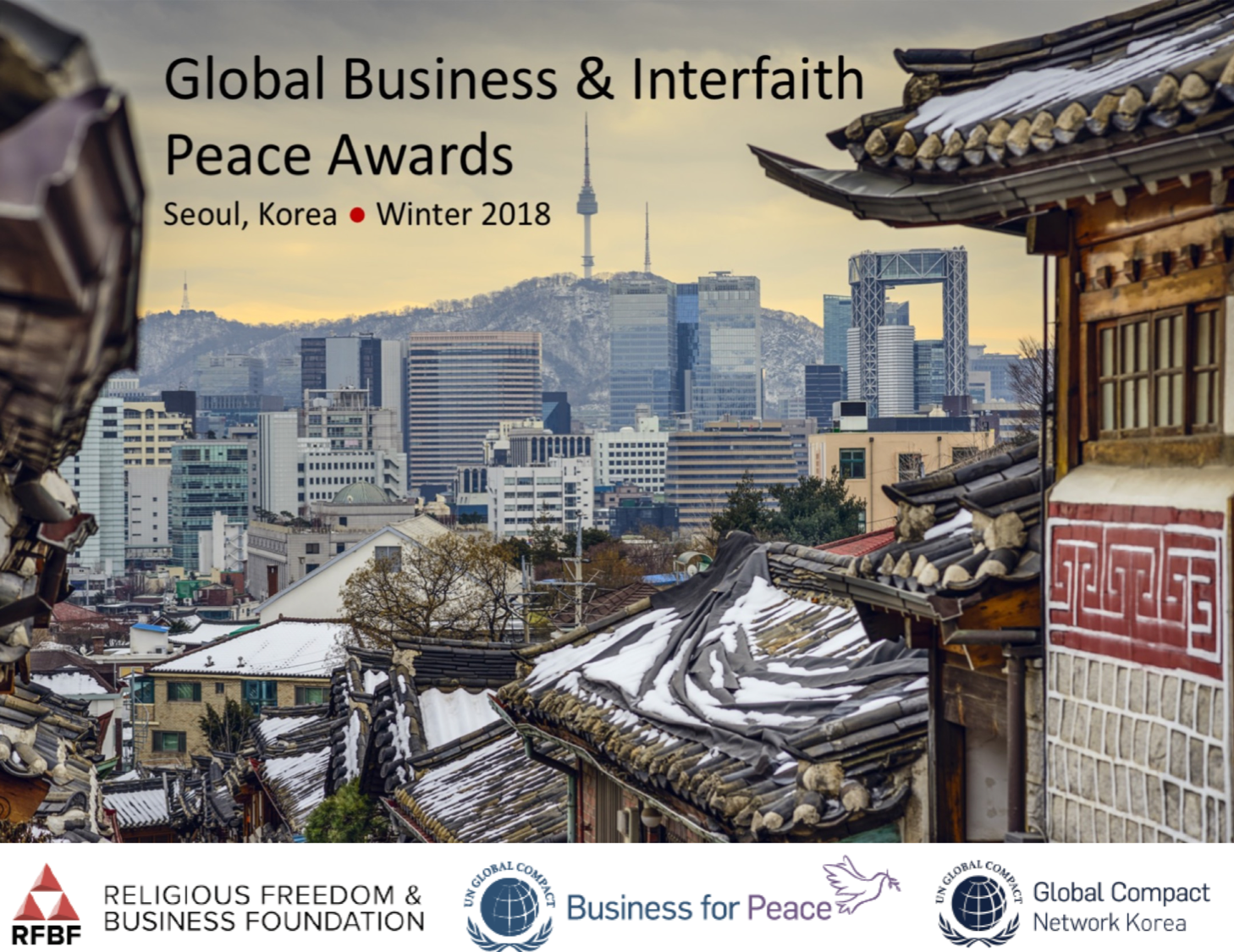 Saluting CEO Commitment and Innovation to Advance Interfaith Understanding, Freedom of Religion or Belief, and Peace 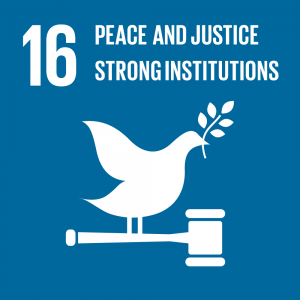 of UN Sustainable Development Goal 16,* the inaugural Global Business & Interfaith Peace Awards were held in Rio de Janeiro on Tuesday, Sept. 6, a day before the Opening Ceremony of the 2016 Paralympic Games. The next awards will be given in Seoul, Korea, ahead of the 2018 PyeongChang Winter Paralympics.

The awards recognize business leaders – current or past CEOs – who have demonstrated leadership in championing interfaith understanding and peace. The Awards are presented by the Religious Freedom & Business Foundation (RFBF) in collaboration with the United Nations Global Compact Business for Peace (B4P) platform, the Global Compact Network Korea, and the UN Alliance of Civilizations (UNAOC).

* SDG-16: Promoting peaceful and inclusive societies for sustainable development, providing access to justice for all and building effective, accountable and inclusive institutions at all levels.

The 2018 jury is comprised of a small group of high-level experts, including from the United Nations (H.E. Nassir Abdulaziz Al-Nasser, UN High Representative for the Alliance of Civilizations); the European Union (H.E. Ján Figeľ, Special Envoy for promotion of freedom of religion or belief outside the EU); the NGO religious freedom community (Dr. Katrina Lantos Swett, President of the Lantos Foundation for Human Rights & Justice, and a former head of the US Commission on International Religious Freedom); the business & peace community (Per L. Saxegaard, Business CEO, and Founder and Executive Chairman of the Business for Peace Foundation, Oslo, Norway); and the religion and peace community (Dr. Sunggon Kim (김성곤) Honorary President, Asian Conference of Religions for Peace).

Additional input during the judging process is provided by the Tanenbaum Center for Interreligious Understanding and its CEO, Joyce S. Dubensky, Esq.

2018 nominations will be accepted in four categories:

Financial and in-kind contributions, and strategic social investment support for NGOs, UN and multilateral agencies or directly to affected communities and/or contribution of functional expertise through volunteering efforts.

Fostering social cohesion and inter-group dialogue and relationship-building in the workplace, marketplace and local community.

Joining forces with Governments, UN entities, civil society organizations and/or other businesses to act collectively to promote interfaith understanding and peace and forge long-term partnerships for local or regional economic and sustainable development.

Awards recipients will have the opportunity to present their commitment to interfaith understanding and peace, while contributing to the UN Sustainable Development Goal 16.

The Value of Recognizing Business Champions

The recipients of the Global Business & Interfaith Peace Awards are recognized leaders on the cutting edge of business. The Awards salute concrete and innovative actions, acknowledging the impact of responsible business practices in advancing the values of interfaith understanding and peace. The winners will become part of an esteemed group of outstanding leaders whose actions will also be recognized by investors, employees, customers and other stakeholders.

A Look Back at the Inaugural 2016 Awards

The first awards honored seven business men and women from around the world for their work in interfaith relations. All of the leaders were recognized for using their businesses to bridge cultural and religious divides.

From among the top finalists profiled in the video below, seven were awarded with Gold, Silver and Bronze medals at the first-ever Global Business & Interfaith Peace Awards.

The jury for the award was comprised of a small group of high-level experts, including from the United Nations: H.E. Mr. Nassir Abdulaziz Al-Nasser, UN High Representative for the Alliance of Civilizations; from the religious freedom community: Dr. Katrina Lantos Swett, President of the Lantos Foundation for Human Rights & Justice, and a former head of the US Commission on International Religious Freedom; and from the business and peace community: Per L. Saxegaard, Business CEO, and Founder and Executive Chairman of the Business for Peace Foundation, Oslo, Norway. Additional input during the judging process was provided by the Tanenbaum Center for Interreligious Understanding and its CEO, Joyce S. Dubensky, Esq. (See full jury profile.)

The awards were presented by the Religious Freedom & Business Foundation, a U.S.-based nonprofit, in collaboration with the United Nations Global Compact’s Business for Peace Initiative and the United Nations Alliance of Civilizations. The foundation helps educate the global business community about how religious freedom is good for business and how they can promote respect for freedom of religion or belief.

“These business leaders show the value of religious freedom – it sets people of faith free to do good motivated by their deepest and most innovative ideals,” said Brian Grim, president of the Religious Freedom and Business Foundation.

Winners come from a variety of religious backgrounds and manage companies and enterprises in the U.S., Indonesia, Mozambique, Uganda, Brazil, Lebanon and Iraq.

“The religious, geographic and business-type diversity of these business leaders shows that the values of interfaith understanding, religious freedom and peace have universal appeal,” Grim went on to say.

H.E. Mr. Nassir Abdulaziz Al-Nasser, High Representative United Nations Alliance of Civilizations and a member of the jury, noted that “this award recognizes those who have taken an initiative to use their business as a platform for promoting positive change and tolerance in our society. I would like to take a moment to thank Brian Grim, the President of Religious Freedom & Business Foundation (RFBF), who pioneered this award initiative. By implementing SDG 17, Strengthen the means of implementation and revitalize the global partnership for sustainable development, RFBF is collaborating with Global Compact and the UNAOC in acknowledging these distinct business leaders at the international level (Read the High Representative’s full comments).

The sole Gold Medal went to Indonesian businessman Y.W. Junardy, President Commissioner, PT Rajawali Corpora, for his facilitation of thousands of marriages for poor Indonesians of all faiths, providing their families with the legal status necessary to advance in Indonesian society.

A Silver Medal was awarded to Don Larson, founder and CEO of Sunshine Nut Company in Mozambique, who works across faith and cultural lines to revive the country’s cashew business.

Four Bronze Medals were awarded. One went to Jonathan Berezovsky, CEO of Migraflix in Brazil, who helps immigrants and refugees integrate into Brazil through facilitating cultural exchanges between them and the local community.

Fouad Makhzoumi, the CEO of Future Pipe Industries Group Ltd., in the United Arab Emirates and Lebanon, promotes religious freedom through microcredit and vocational training to help over 10,000 Lebanese of all faiths set up sustainable businesses.

H. Bruce McEver, co-founder and chairman of Berkshire Capital Securities LLC in New York London, has a foundation which works to cultivate inter-religious understanding through the promotion of religious literacy.

Emma Nicholson, Baroness of Winterbourne, executive chairman of the Iraq Britain Business council and founder and chairman of AMAR Foundation in the U.K. and Iraq, works to build business, technology, trade and investment in Iraq, with a special focus on women of religious minorities, such as Yazidis.

Grim said the finalists, who include Christians, Jews, Muslims and the religiously unaffiliated, exemplify the mission of the Religious Freedom & Business Foundation – to show that religious freedom is vital to a fertile business climate.

Other finalists for the awards recognized during the ceremony were Jonathan Shen Jian, CEO, Shinework Media, China, whose films promote global cultural diversity and interfaith understanding in China’s media market of one billion people through his film work.Tayyibah Taylor, CEO and founder, Azizah Magazine and WOW Publishing, Inc., Georgia, U.S., who died in 2014, used her magazine to help Muslim women and people of other faiths better understand Islam. Her daughter Mariam accepted the award in her honor. And Joaquim Augusto Sanches Pereira, Regional Business Leader at Dresser-Rand, a Siemens Business, works with the Vaga Lume initiative, promoting peace and cultural diversity through literary programs for children, teenagers and adults in the multicultural and diverse Amazon region.