With the Dec. 12 Senate confirmation of Rabbi David Saperstein as U.S. Ambassador for International Religious Freedom, Brian Grim and Robert Smith argue in a new op-ed that by resetting our own resolve to positively encourage countries to protect international religious freedom ideals, a more nuanced national and foreign policy could advance our economies. 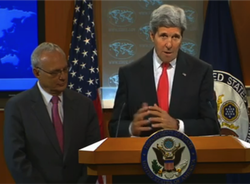 Recent scholarship indicates that religious freedom is an important contributing factor for much of what the world yearns for — peace and economic prosperity. As described in Brian Grim and Roger Finke’s book, “The Price of Freedom Denied,” religious freedom is not only strongly correlated with other freedoms and civil liberties, but it is also an important factor in other universally desirable goods such as lower levels of armed conflict and poverty, along with higher levels of income and better lives for women.

Conversely, the lack of religious freedom leads to increased hostilities and constrained liberties sometimes shocking to the human conscience. For example … [read the entire article at Deseret News]