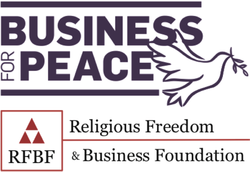 Brian Grim, President of the Religious Freedom & Business Foundation, discussed how the Foundation is looking for ways to foster respect for religious freedom and religious minorities in response to the social and economic harms that occur as a result of the cycle of violence that occurs as government restrictions on religious freedom stoke social hostilities involving religion, and vice versa. One example discussed below is helping Dalits turn waste into wealth.

Grim also discussed projects in the works, such as the Business, Faith & Freedom Forum at the World Expo in Milan in 2015, which will include an exciting look into how the business of food and religious freedom intersect. He also discussed the Global Awards to be held in Rio de Janeiro during the 2016 Olympics.

Melissa Powell from the UN Global Compact’s Business for Peace platform discussed their 17 global compact networks, and the data they have compiled over the past decade. They have over 100 companies around the world from 29 countries participating. Their work has focused on how the private sector can contribute to peace, and how implementation can differ from country to country yet with the same guiding principles.
Participants in the webinar discussed relevant case studies with reference to how religious freedom is good for business. 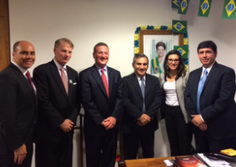 Leite (at right) with Secretary General of Brazil

Ricardo Leite, Esq., President of Brazil’s Association of Religious Freedom & Business, discussed the high level meetings that the nation has hosted regarding religious freedom and business at Brazil’s judicial, administrative and executive levels. A new project is to introduce a business school curriculum focused on fostering respect and awareness of the benefits of religious freedom.

Greg Clark, Esq., Vice President of the Religious Freedom & Business Foundation, discussed how when a business is respectful of its employees’ religious beliefs, work productivity is increased and employee retention is greatly promoted. He stressed that employees are the backbone of any corporation, and incurring their loyalty is key to a business’ success.

Pasquale Annicchino, Ph.D., LL.M., Senior Research Fellow of the Religious Freedom & Business Foundation, and Research Fellow at the Robert Schuman Centre for Advanced Studies, European University Institute discussed the Business, Faith & Freedom Forum at the World Expo in Milan in 2015, which will include an exciting look into how the business of food and religious freedom intersect. Annicchino also noted how it will help inform and set a standard for future projects of the Religious Freedom & Business Foundation.

Otto Kölbl, researcher at the Université de Lausanne Faculté des lettres, section d’allemand, discussed an interesting new project in Tibet.  His research has shown how facilitating the Tibetan tourist industry will help them culturally, economically and religiously, as well as bring peace, harmony and cooperation in the region.