Can We Protect Religious Freedom and LGBT Rights?  Covenantal Pluralism is the key. 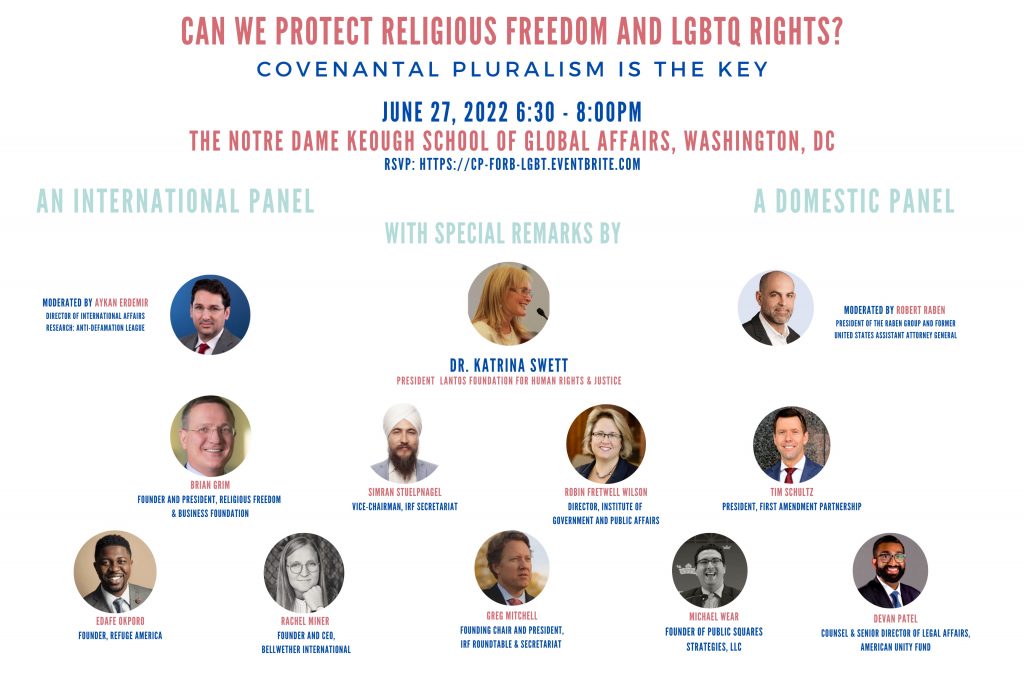 Religious belief and faith has a complicated relationship with LGBT concerns, yet one where covenantal pluralism provides the framework for mutual respect and lasting collaboration for the many concerns related to religious freedom and the unassailable nature of each individual human’s conscience.

The intention of this event is that divides may be bridged, relationships might be made or healed, and hope might prevail over fear. It is our hope that attendees may grow in understanding of each other and that our respective communities may find friendship, allyship, and kinship.

The evening will include featured remarks by special guest Dr. Katrina Lantos Swett, President of the Lantos Foundation for Human Rights and Justice.

Following Dr. Swett’s remarks will be an International Panel, with:

Simran Stuelpnagel, Vice Chairman of the International Religious Freedom (IRF) Secretariat and Chairman, Sikh FoRB. Simran is a Fellow of the Royal Society of Arts in London and Senior Fellow at The Dietrich Bonhoeffer Institute.

Edafe Okporo, Founder of Refuge America, author of Asylum and recipient of a MacArthur David Grant, 2020.

Moderator, Aykan Erdemir, former member of the Turkish Parliament, a founding and steering group member of the International Panel of Parliamentarians for Freedom of Religion or Belief.

After the international panel will be a Domestic Panel, with:

Michael Wear, Founder of Public Square Strategies and co-author of Compassion and Conviction: The AND Campaign’s Guide to Faithful Civic Engagement.

Presented by: Bellwether International and Parity, with co-sponsors including: 1st Amendment Partnership, American Unity Fund, and The Raben Group