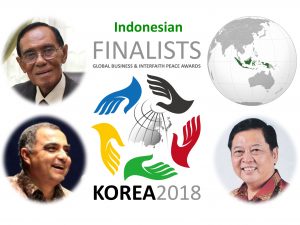 On March 7-8, 2018, the days before the opening ceremony of the 2018 PyeongChang Winter Paralympics, international business, government and civil society leaders will gather in Seoul Korea for the second biannual Global Business & Interfaith Peace Symposium and Awards. The symposium will show to a global audience – in the spirit of the Paralympics – that peace is achievable.

Mr. Bambang Ismawan, Mr. Haidar Bagir, and Mr. Sumartono Hadinoto (pictured above, counterclockwise from top left) were selected from nominees representing 25 countries on all six inhabitable continents to be part of a small group of CEOs to be honored for their work. The awards are given once every two years in the host city of the Olympics/Paralympics.

Brian Grim, President of the Religious Freedom & Business Foundation, observed, “It is extraordinary that we have three medalists from Indonesia, which goes to show not only the importance of interfaith understanding in Indonesia, but also the lessons Indonesians have to share with the world.” Grim also noted, “However, it is not surprising to see a strong showing from Indonesia given that last year’s top honoree was also an Indonesian, Mr. Y.W. Junardy.”

Mr. Bambang Ismawan is being honored for working with all faiths to build the largest network of people and organizations working to eliminate poverty, build interfaith understanding and peace in Indonesia, the country with the world’s largest Muslim population.

Mr. Haidar Bagir is being honored for contributing to interfaith understanding and peace in Indonesia in multiple ways, including leading the Compassionate Islam Movement, which galvanizes and mobilizes moderate Muslims in the face of increasing extremism and inter-religious tensions in the country.

Mr. Sumartono Hadinoto is being honored for his leading role in organizing humanitarian and socioeconomic initiatives as well as intercultural programs, such as the annual Solo Imlek Festival, that bring people together so that religious and ethnic violence might never happen again. 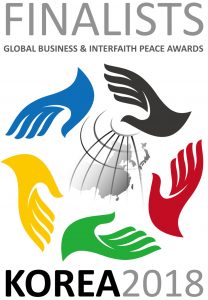 The inaugural Symposium and Awards were held at the start of the 2016 Paralympic Games in Rio de Janeiro.