It is widely known, though unfortunately often rejected, that societies which respect and protect the rights to freedom of religion or belief experience less conflict and violence, and enjoy greater social harmony. But were you aware that new research suggests such societies also see better economic outcomes? 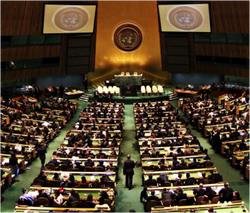 Over the past year, this newfound connection between religious freedom and economic growth has received much focus and attention. Just how important is it to foster respect by businesses for religious freedom? How are state and non-state actors working to engage businesses to promote the rights to freedom of religion or belief? And how can civil society groups get involved?

To consider and address these questions, the United Nations NGO Committee on Freedom of Religion or Belief in New York will host a panel discussion on Wednesday, December 10, 2014 featuring Dr. Brian Grim, president of the Religious Freedom & Business Foundation, with responses from Prof. Silvio Ferrari, an expert on freedom of religion and the law, and Jeffrey French, an expert in the peacemaking potential of business.

Each speaker will provide brief remarks, leading into a discussion moderated by Michael De Dora, president of the NGO Committee on Freedom of Religion or Belief.

More information on the speakers: